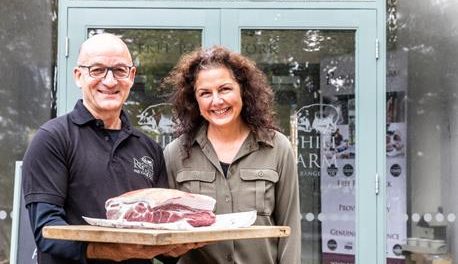 Great Taste, the world’s most trusted food and drink awards, has reached its grand finale for 2020, with the top honour of Great Taste Supreme Champion presented to Redhill Farm Free Range Pork near Gainsborough in Lincolnshire for its Free Range Pork Shoulder.

Ethically farmed to the highest welfare standards by Jane and Terry Tomlinson, Redhill Farm’s Free Range Pork Shoulder impressed the judges with its “flavour reflecting how the animal has been treated with love, care and attention.” Providing their Duroc cross pigs with everything they need to enjoy a natural, stress-free life, Jane and Terry are also dedicated to ensuring that nothing unnecessary is imposed on their animals, as they spend their days roaming and rooting around the farm.

Having won Great Taste awards consecutively for the past 17 years, also landing the Golden Fork from East Anglia and the Midlands in 2014 and the Golden Fork from the Midlands in both 2019 and 2020, Redhill Farm has produced consistently high levels of quality, year in, year out. Now earning the ultimate seal of approval from some of the world’s most demanding palates, who revelled in the Pork Shoulder’s “tremendous character”, describing it as “crunchy and fatty with a delicate sweetness, but an almost grunting porkiness”, the Lincolnshire-based farm has been rewarded for the extra time, effort and care that has gone into the farming, production and selling of its free range pork.

Committed to working only with likeminded partners, who value quality, provenance and authenticity, Redhill Farm is highly selective about who it supplies and continues to sell most of its produce in person at local farmers markets and through its two shops; the aptly named ‘Shop on the Farm’ and the recently opened ‘Shop in the Bail’ in the centre of Lincoln, which has been named as a finalist two years running in the Guild of Fine Food’s Shop of the Year competition. Through this comprehensive approach to the production and selling of its pork, this year’s Great Taste Supreme Champion plans to remain an ethical small business that delivers quality from farming through to retail.

Jane Tomlinson, managing director of Redhill Farm Free Range Pork, commented: “We enter Great Taste each year to prove our quality and to prove it consistently year in, year out… in our quest to stand out from the crowd. I think with this award we may just have finally achieved that!”

John Farrand, managing director of the Guild of Fine Food, organisers of Great Taste, added: “Jane and Terry Tomlinson are truly worthy winners of the Supreme Champion accolade, having consistently achieved Great Taste stars and trophies over many years, raising their game along the way to reach the very top of the pile. As uncertainty continues regarding food safety and animal welfare standards post-Brexit and the nation continues to take a closer look at where its food comes from throughout the COVID-19 crisis, this win for Redhill Farm serves as a timely reminder of what our best farmers are doing to feed us, care for their animals and nurture their patch of land. Going above and beyond free range standards, Redhill Farm has produced a joint of pork that rose above 12,776 other products to take the top prize, which should give those in power some food for thought. 2020 has seen unprecedented challenges thrown at folk in food and drink, whether they’re producers, retailers – or awards schemes for that matter – but this is a rare moment to celebrate and savour.”

Having impressed at every stage of the blind-tasted judging process, as a record-breaking 12,777 entries were assessed over 14 weeks of remote judging and socially distanced judging sessions, the Free Range Pork Shoulder was crowned Great Taste Supreme Champion 2020 during the virtual Great Taste Golden Fork award ceremony on Thursday 22 October.

Taking place across the Guild of Fine Food’s social media channels and website, the online event brought together food lovers, producers, retailers, buyers and chefs to discover this year’s stars of food and drink, providing a vital boost for the industry as the nation moves towards the most important Christmas period in a generation. Held later in the year than usual, after the lockdown interrupted judging just one week into the schedule, the Golden Fork trophy announcements are the final instalment in a Great Taste calendar that has been reinvented at every stage, in order to stimulate much-needed consumer support for independent retail and hospitality over the challenging months ahead.