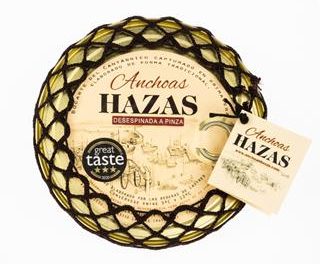 Great Taste, the world’s most trusted food and drink awards, has reached its grand finale for 2020, with the Golden Fork for Best Imported Food presented to Anchoas Hazas from Luces in the Spanish Principality of Asturias for its Anchoas Hazas | Anchovies.

Using only anchovies caught from the Cantabrian Sea during Spring, when fat levels are minimal and the fish are at their optimum phase of the year to deliver exceptional flavour, aroma and texture, Anchoas Hazas | Anchovies are produced traditionally by hand. Each anchovy is hand-rubbed under cold water and placed in olive oil of the highest quality, before immediate canning to preserve their complex flavours. Described by Great Taste judges as “firm textured, but melt in the mouth” and “richly meaty and deeply savoury, with a mineral complexity that rounds off the flavour”, these anchovies “would instantly lift any dish that they may grace.”

Having impressed at every stage of the blind-tasted judging process, as a record-breaking 12,777 entries were assessed over 14 weeks of remote judging and socially distanced judging sessions, the Anchoas Hazas | Anchovies were celebrated as the Best Imported Food during the virtual Great Taste Golden Fork award ceremony on Thursday 22 October.

Taking place across the Guild of Fine Food’s social media channels and website, the online event brought together food lovers, producers, retailers, buyers and chefs to discover this year’s stars of food and drink, providing a vital boost for the industry as the nation moves towards the most important Christmas period in a generation. Held later in the year than usual, after the lockdown interrupted judging just one week into the schedule, the Golden Fork trophy announcements are the final instalment in a Great Taste calendar that has been reinvented at every stage, in order to stimulate much-needed consumer support for independent retail and hospitality over the challenging months ahead.