Talk us through the main ingredients within the vegetarian menu

Turkey is definitely not just about kebabs. On the menu at Rüya. we have a huge choice of vegetarian dishes, we have a choice of 5 dishes to ponder whilst you look at the menu, 4 of which are vegetarian, we have many types of salads, and a vegetarian soup. From the main courses you can take a Güveç a selection of seasonal vegetables cooked in a spiced tomato and red pepper sauce, we have Keskek, which is a type of barley risotto, and then there is eggplant, the Turks love eggplant, we also use many types of grains, breads etc, so there is something for everybody

In your opinion, do you think there has been a rise in people becoming vegetarian?

Undoubtedly yes, I think there has been a lot more interest in healthy eating in particular, and there is a huge increase in dietary requirements compared to when I started. I just assume lots of people are taking their health a bit more seriously, and Turkish cuisine for the most part is very healthy indeed – it’s probably why they live so long!

What flavours are there within the dishes?

There are a lot of flavours going on, they use a lot of spices, chilli, etc, but in a lot more subtle way to say they do in other parts of Asia. Turkey is very seasonal, and they let the main ingredient stand out. The quality of the ingredients they have are amazing – the flavours blow you away. Tomatoes taste like they did when you were a child, for example. They’re not your supermarket quality you see a lot today.

Some people may say that vegetarian dishes compromise or don’t include much flavour, what would you say to this?

Not at all. You can get just as much flavour and texture in vegetarian dishes as in non vegetarian ones, and at Rüya there is a large array of different grains, vegetables, spices etc to choose from. We even make a special manti (small ravioli) and several types of Pide (Stuffed breads) just for vegetarians.

What is the Anatolian cuisine?

Anatolian cuisine is food from the peninsula of land that today constitutes the Asian portion of Turkey. Because of its location, at the point where the continents of Asia and Europe meet, Anatolia was, from the beginnings of civilization, a crossroads for numerous peoples migrating or conquering from either continent. People from the Hittite empire, Greeks, Roman, Byzantine all passed through Turkey and left their influence on the food, culminating in the Palace kitchens of the Ottoman Empire. It’s important to remember that Turkey is so vast (bigger than Germany and France combined) that there is a myriad of cultures and regions, each with their own dishes and traditions – it’s an amazing place!

What is one of your favourite dishes on the menu and why?

My favourite vegetarian dish on the menu would be the mushroom Keskek with truffle butter. Traditionally Keskek comes from the Black Sea and is a type of porridge made from barley and lamb. It’s actually the Turkish dish that is recognised by the United Nations as being culturally significant. We serve a traditional one but we also do a wild mushroom version, flavoured with a little truffle butter and sage.

How important is to continually experiment with new flavours and dishes and offer something new and different?

It’s vital, in this day and age. You have to really try your hardest to get guests to come back as there is so much choice. I personally visit Turkey at least 2-3 times a year, purely to explore the food scene in various areas, and both the kitchen in both London and Dubai are continuously striving to come up with new dishes. We have been open in Dubai over 3 years now so we have a back catalogue of recipes that London hasn’t even seen yet, and its growing all the time. 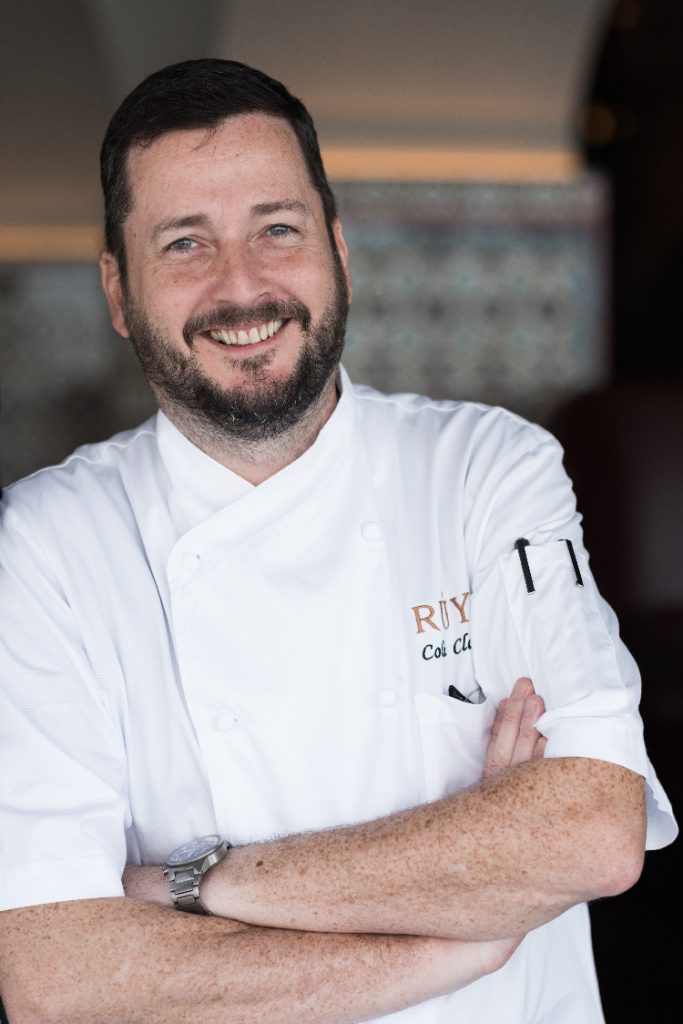 Born on the Isle of Man in 1965, Colin Clague spent his childhood among the islands fishing and farming communities. Greatly inspired by his mother, who was a qualified chef and passionate home cook, Clague developed a keen sense of the quality of local produce and the seasonality of dishes and their ingredients. These influences led him from school straight to catering college fueling an un-wavering desire to expand his culinary foundations and also fulfill a growing enthusiasm to travel.

He then moved to London where he got his first exposure to the disciplines and rigorous of the professional kitchen. Working with some of the top names of that decade – Anton Mosimann, Peter Langan, Gary Hollihead, and Sir Terence Conran, Clague gained experience and confidence whilst travelling extensively throughout Europe and the Middle East.

Some of his notable achievements include being in the pre-opening team of the prestigious Burj Al Arab in Dubai, and Executive Chef of an award winning Japanese izakaya restaurants – Zuma in London and Dubai. Colin then moved to join Caprice Holdings in the United Arab Emirates where he was in charge of all the restaurants under the group, as well as the opening of the Ivy at the Jumeirah Emirates Towers.

In 2012, Clague was in charge of the pre-opening and opening of Michelin starred restaurant Pollen by Chef Jason Atherton’s, before moving to Q’bara, where Colin won several awards from Chef of the Year to Chefs Chef by Pro Chef Middle East and Whats On magazines. In 2015, Colin tool the leap and managed the opening of Jean Georges Dubai, a restaurant with one side a three Michelin starred restaurant serving up to 70 covers, whilst the other side serving a more casual fare where he yet again won more awards from What’s On Magazine and Pro Chef Middle East Magazine.

Through the years Clague’s dedication and passion saw him acquired extensive industry experience that spans the globe. His culinary creations are ingredient driven and food focused; he believes in using the best quality ingredients to create sublime flavour’s executed with simplicity and finesse.

In 2016, Chef Colin Clague joined Rüya, a new Anatolian restaurant concept from the Dogus Restaurant Entertainment and Management Group, situated in the Dubai marina this stunning restaurant designed by Conran and partners, has already achieved great success and is Multi award winning

Due to the success of the Dubai restaurant, a Second Rüya was opened in Park Lane Mayfair in London, England, which opened in June 2018 and has already succeeded in creating a new style of Turkish cuisine in the Capital