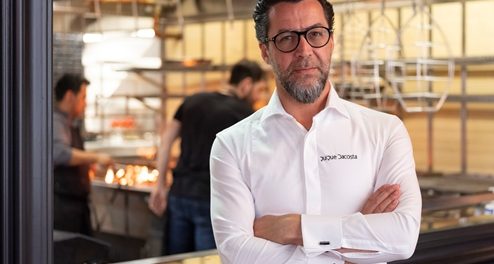 Three Michelin-starred chef Quique Dacosta has received the Marquis of Desío Award for Best Businessman in the Spanish Restaurant Industry. Given in Madrid on the 17th October by the Real Academia de Gastronomía (Spanish Royal Academy of Gastronomy), this award is in recognition of the chef’s outstanding work and contribution to the sector since the beginning of his career.

The award comes in the same year that the Quique Dacosta Group, founded by the chef in Valencia, celebrates its tenth anniversary. In the past year, the chef has put two wide-reaching projects in motion – ArrosQD (his first international restaurant located in London and with rice at its heart) and Quique Dacosta Catering y Eventos (a culinary project which, in addition to travelling all over Spain, has a one-of-a-kind space in Valencia with capacity for up to 800 people). Both joined Dacosta’s existing restaurants El Poblet (1 Michelin star), Vuelve Carolina, Llisa negra and Mercatbar in Valencia and Quique Dacosta Restaurante in Denia (the group’s flagship and worldwide creative benchmark). A young, firmly established hospitality company under constant expansion, the group currently employs almost 200 employees.

Upon receiving the award, Dacosta said, “The group was founded in the midst of difficult socioeconomic circumstances, but since then, we haven’t stopped growing. This is thanks to everyone at the company’s professionalism, extraordinary management and passion. We have built a project based on my plans and the willpower of people with tons of talent, skill and love for the trade in all departments, be it the dining room, kitchen, sommelier space, or offices. We promise we won’t stop here”.