Held at the London Marriott Hotel, in Grosvenor Square, following the first day of the Casual Dining trade show, the annual awards recognise the best new openings and standout restaurants, bars and pubs of the year.

Steve Holmes, CEO of Azzurri Group, which was named Casual Dining Group of the Year, said: “We are truly delighted to receive this award, especially given the quality of other businesses in the category.  It’s fantastic recognition for our teams, who work tirelessly to deliver the best experience they can for our customers, and this award is for them.”

Peter Boizot, founder of PizzaExpress, who sadly passed in December last year, was also remembered and recognised for his outstanding contribution to the casual dining industry.  His posthumous Casual Dining Outstanding Contribution Award was accepted by Zoe Bowley, the company’s MD, to a standing ovation.

Dishoom’s founders – cousins Kavi Thakrar and Shamil Thakrar, received this year’s Trailblazer of the Year Award – the only category nominated directly by the judges. 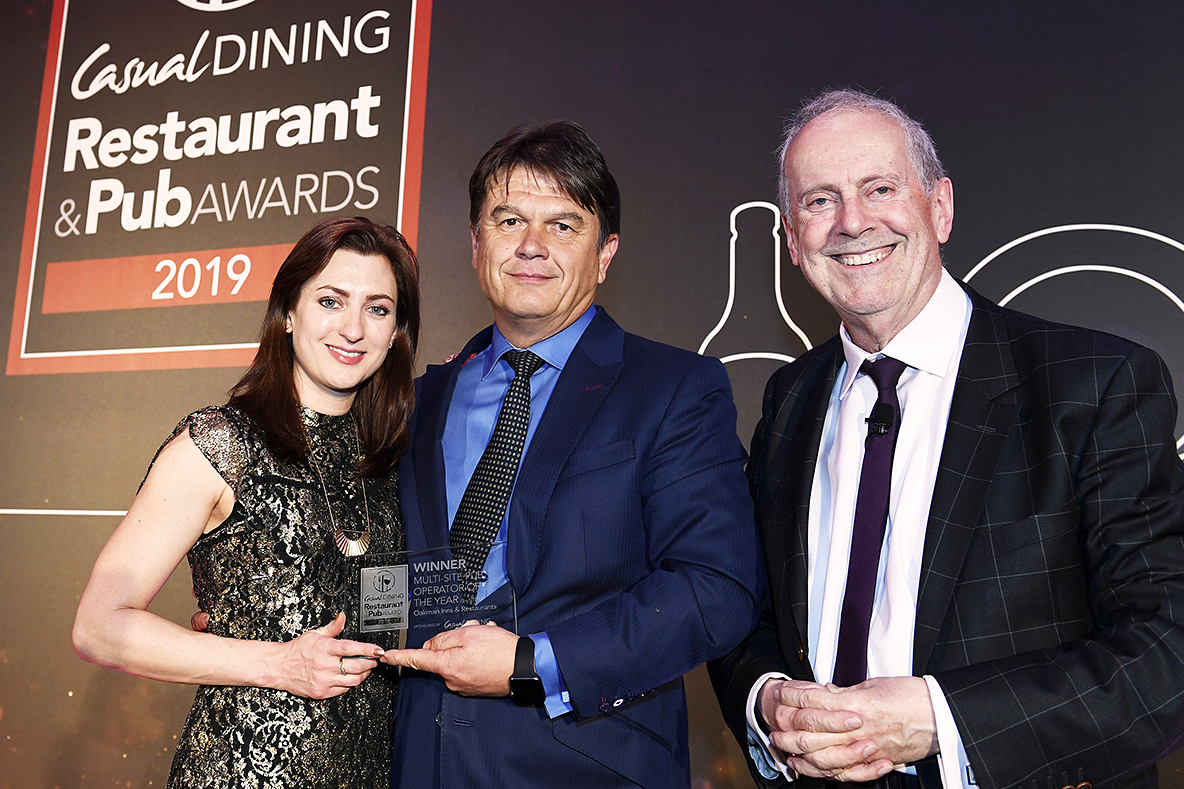 It was also a memorable night for The New World Trading Co, whose The Florist brand won three trophies, including New Casual Dining Concept of the Year, Best New Restaurant Site and Best Designed Casual Dining Restaurant of the Year – the latter two awards for its newly opened Liverpool venue.  The company’s fourth award of the night was for the hotly-contested ‘Employer of the Year’.

wagamama was also celebrating, having retained its title of Large Multi-Site Restaurant Brand of the Year (over 20 sites) for the third year in a row.  It also added Menu Innovation (over 20 sites) and Marketing Campaign of the Year to its awards haul.

Simon Potts and the team at The Alchemist also repeated their win of last year, with another Best New Pub/Bar Site award.  This time for their first welsh site – in Cardiff’s St Mary Street. 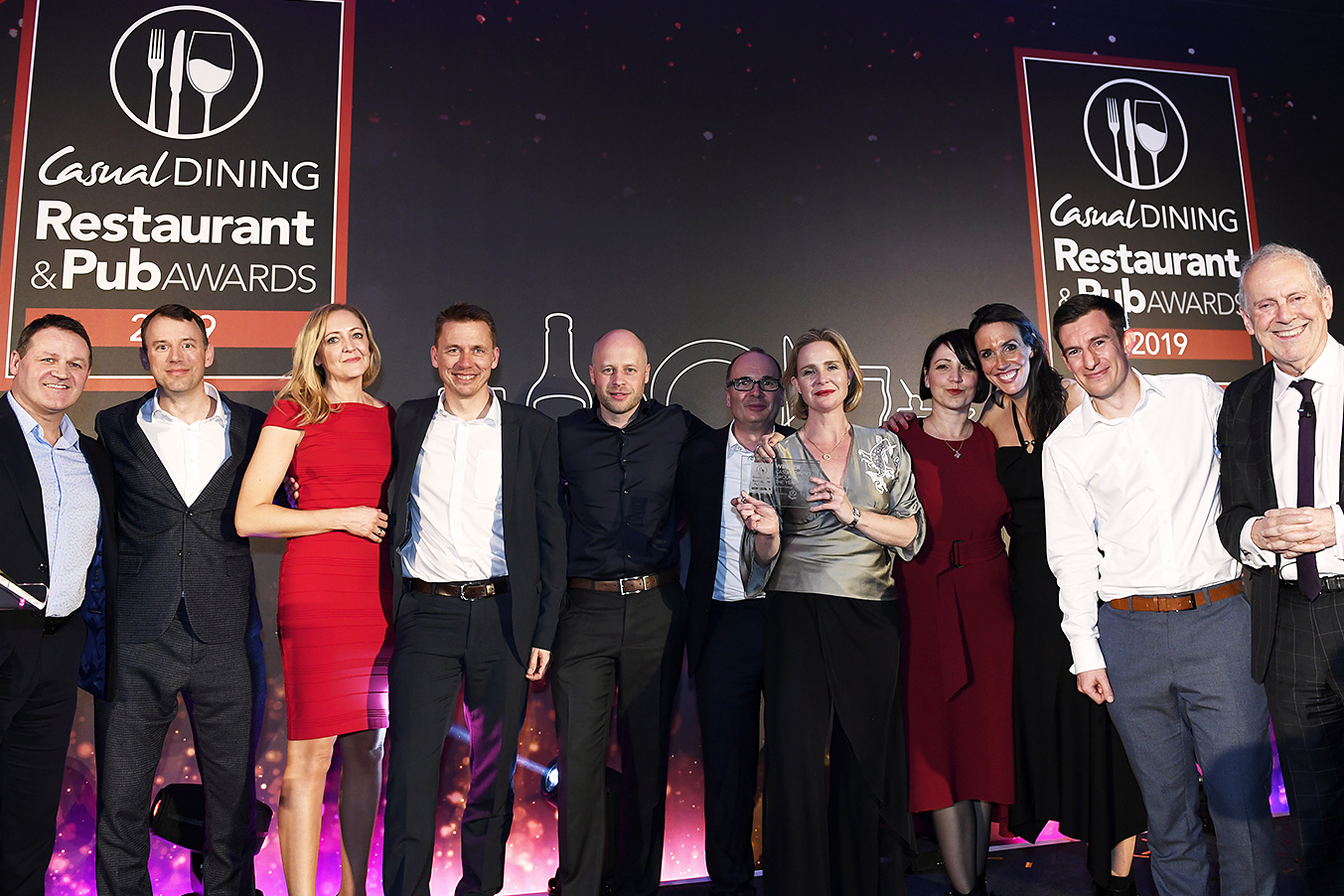 “I’d also like to thank the many, many people who aren’t here!  The tens of thousands of customers who continue to support us each and every day, week in week out, snow or sun, Brexit or no-Brexit!  Also, to the amazing staff in all of the restaurants who are totally unwavering in their support to Jamie, and the wider Team; and, of course, to my fabulous Leadership Team who without them I/we would be nothing.”

“The Casual Dining Restaurant & Pub Awards are the most important annual celebration of the very best in the business,” says Chris Brazier, group event director at Diversified Communications UK (organiser of the awards and Casual Dining show).

“Once again the sheer quality of this year’s awards finalists – over 100 restaurant and pub operators from across the country – was exceptional.  Standing out from the crowd is no mean feat in such a hugely competitive sector.  But our 2019 winners and highly commended recipients do just that.  From the big names to the smaller independent operators, they have been singled out for their continuing commitment to driving innovation, inspiring creativity and delivering an all-round incredible casual dining experience.  Congratulations again to each of our fantastic winners,” he says.

Casual Dining’s event manager, Eva Ellis, says: “Over the past four years, the Casual Dining Restaurant & Pub Awards has established itself as a key event on the casual dining calendar.  It’s a fantastic way to reward and celebrate the achievements of those companies who are driving forward Britain’s fastest-growing food sector.  Congratulations to each of our deserved winners.” 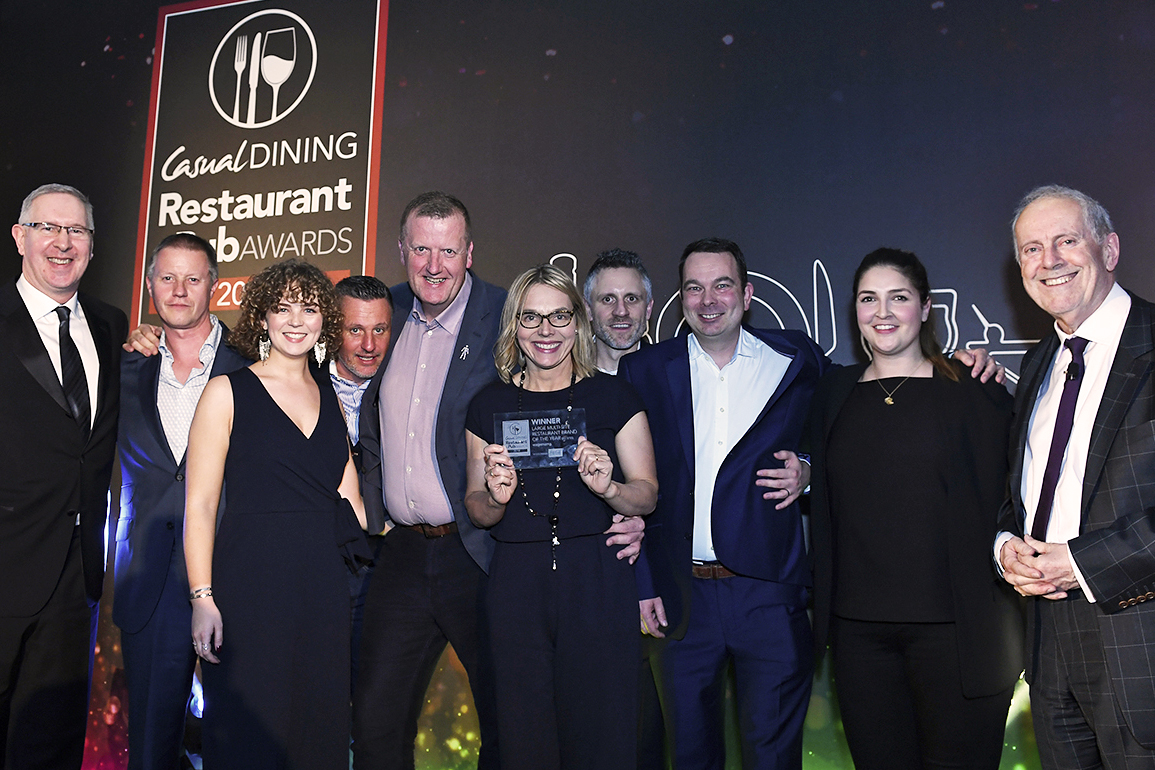 Trailblazer of the Year – sponsored by Trail

New Casual Dining Concept of the Year – sponsored by Reynolds

Employer of the Year – sponsored by Yapster

Marketing Campaign of the Year – sponsored by Chef Direct

Pub of the Year – sponsored by Fentimans

Independent Restaurant of the Year (under 5 sites) – sponsored by Deliveroo

Casual Dining Group of the Year – sponsored by Carlsberg UK

Other winners on the night commented:

“It is a real honour to win ‘Best Independent Restaurant’. We have had an exciting year celebrating our 10th anniversary and branching out, so for The Chilli Pickle to still receive recognition from our peers means so much,” says Alun Sperring, co-owner of The Chilli Pickle.

“We are extremely proud to have won this prestigious award, which is dedicated to all our lovely staff and loyal customers.  We’ve been proud to hold the keys to this 300-year-old independent pub and restaurant for the last 16 years, during which time we’ve endeavoured to innovate and refresh our ideas constantly, whilst also trying to remain consistent in our offer. We look forward to welcoming old and new customers for many years to come,” says David Carless, co-owner of The Boathouse, Falmouth.

The second day of Casual Dining show is open from 10am to 5pm tomorrow (Thursday 28 February) at London ExCeL.

For further information and to register, please visit www.casualdiningshow.co.uk.