After an intensive day of judging the Craft Guild of Chefs has revealed the 40 chefs they will be taking through to the next stage of The National Chef of the Year. With many new faces entering this year, the candidates gave the expert panel of judges a difficult task. 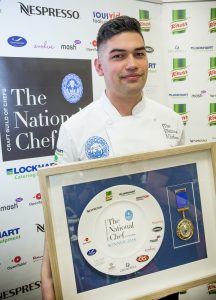 Overseen by Gary Jones, executive head chef at Belmond Le Manoir as Chair of judges, David Mulcahy, Alyn Williams, Peter Joyner, Andrew Bennett, Russell Bateman, Phil Howard, Steve Scuffell, Sarah Hartnett, Gary Hunter and Willie Pike whittled the impressive list down to 40. At this stage, all judges scores are based on an online entry including descriptions of dishes, cooking method and photographs of the completed menus. Chef names and workplaces are removed for the judging process, so judges are purely scoring on the dishes submitted.

The competition is open to chefs who are 24 years or older as of February 1st, 2018. Competitors come from all areas of the hospitality business including hotels, restaurants, pubs, contract catering, fine dining, private and public sectors.

The Sheffield semi-final will take place on the morning of Tuesday, 12th June 2018 and will include:

Three heats will be completed at Le Cordon Bleu in London on Tuesday, 19th June 2018 and these will include:

The winner of each heat will automatically be seeded into the final which takes place on Tuesday 2nd October at The Restaurant Show. It will then be down to the highest scores across all four heats to discover which six chefs will complete the line-up.

Vice-President of the Craft Guild of Chefs and organiser of the UK’s most prestigious culinary competition, David Mulcahy said: “I am delighted with the quality of entries for this year’s National Chef of the Year. The task set focused on key skills, provenance of produce and a modern interpretation to classic dishes. We have seen some exciting innovation and creativity from the entries. It is encouraging to see many new faces entering this year and with a diverse selection of chefs from all sectors we are in for a great series of semi-finals.”

Gary Jones, Chair of National Chef of the Year judges, added: “When we set the brief we wanted the focus to be on two key things – showcasing our exceptional British produce and evolving chefs’ skills. What we’ve witnessed in the judging process is that the chefs have stepped up to the mark with creative and innovative ideas. There’s only ten places up for grabs in this final and we’ve got some seriously talented chefs in the running. Over the coming weeks I expect these 40 chefs to put the work in and be ready to impress the judges in Sheffield and London. Only the best will make it.”

Andrew Bennett, new Chair of the Craft Guild of Chefs was taking on one of his first tasks in his new role. He commented: “The National Chef of the Year continues to go from strength to strength and having judged this competition over many years, it is amazing to observe how it has transformed with the times. As the new Chair of the Guild, I’ve been able to view the competition in a different light. It’s a key element of what the Guild do so well.”

Those who get through to the top ten will have the opportunity to cook for some of the biggest chef names in the UK with many judges for the final already lined-up. This includes Clare Smyth, Tom Kerridge, Philip Howard, Ollie Dabbous and Mark Flanagan.