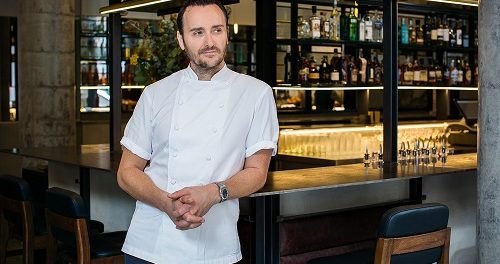 Jason Atherton is delighted to announce that he is now overseeing three F&B outlets at The Shanghai EDITION. This is Atherton’s third venture with globally renowned hotelier and designer, Ian Schrager. Located at the northeast corner on the Nanjing Road East and Henan Road in Puxi, West of Huangpu River, the hotel is a unique combination of two separate towers and sees the refurbishment of one of the city’s finest buildings – the former headquarters of Shanghai Power Company built in 1929. This Art Deco monument houses the public area of the hotel, comprising one of Atherton’s new restaurants, Shanghai Tavern. The development’s heritage-protected historical building flows into a modern, state-of-the-art skyscraper, creating a unique synergy between old and new Shanghai. The new tower features 145 rooms and suites, accompanied by Atherton’s two other restaurants, HIYA, a new Japanese restaurant by Jason Atherton on the 27th floor and Canton Disco, a Cantonese style restaurant.

Jason Atherton comments on his ongoing working relationship with Ian Schrager; ‘This is our third project with Edition and Ian Schrager – we couldn’t be prouder to be part of this exciting launch. Ian has been a very important figure in my life since embarking on our partnership, first with Berners Tavern in London and then The Clocktower in New York which was awarded a Michelin star in 2017. For us to now be bringing our flagship restaurants to Shanghai is just incredible’.

The ground floor restaurant, Shanghai Tavern is very similar to its London sibling on Berners Street. The brand-new restaurant offers a brasserie-style menu available all day with an open kitchen and a stunning bar. Drawing on Elliot Hazzard’s period architecture and coffered ceiling, the design plays on the history behind the Shanghai Power Company Building, creating a communal space that has been designed for pocketed intimacy. Canton Disco is Atherton’s first restaurant partnership with Hong Kong based restaurant group, Black Sheep. Located on the third floor, Canton Disco serves traditional Cantonese inspired dishes with contemporary twists. The menu has been curated by celebrated chef, Jowett Yu from Black Sheep’s Ho Lee Fook in Hong Kong and presents a picture of modern Shanghai throughout the main dining room and five exclusive private dining rooms.

The third outlet, located on the 27th floor, is called HIYA meaning ‘clouds in the sky’ in Japanese. Inspired by The Social Company’s flagship Japanese Izakaya-style restaurant, Sosharu in London, the venue features a rooftop bar with astonishing views of the Huangpu River. Designed by award winning Neri & Hu, HIYA sees a slick, sophisticated and glamourous interior, very much in keeping with the rest of the development. Executive chef of The Social Company group, Alex Craciun, is relocating from the UK to oversee the launch of HIYA.

All three outlets are overseen by Chef-de-Cuisine Scott Melvin who has worked with Atherton for the past 14 years. Scott was previously Executive Chef at Jason Atherton’s The Commune Social also in Shanghai.