Michel Guérard started his career as an apprentice pastry chef becoming head pastry chef at Hotel de Crillon, Paris. In 1958, at just 25 years old, he was awarded the coveted title of Meilleur Ouvrier de France. Guérard then furthered his excellent reputation cooking for some of the most reputable establishments in Paris. In 1965, the opening of his own restaurant Le Pot-Au-Feu marked the start of his foray into the world of Michelin star success, being awarded his first Michelin star in 1967, and the second in 1971, putting Le Pot-Au-Feu at the heart of the Parisian gastronomic scene. 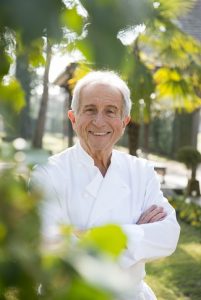 In the early 1970s, Michel Guérard, alongside chefs Paul Bocuse, Roger Vergé, Troisgros brothers and Alain Chapel, championed the movement of French Cuisine and today are considered to be the founding fathers of Nouvelle Cuisine. However, it was Guérard’s passion for produce, the art of healthy and gourmet living, the love for his wife Christine Barthélémy, which led him to move from Paris to Les Prés d’Eugénie, in the spa village of Eugénie-les-Bains, in southwest France. Here he developed a healthy yet delicious diet (called Grande Cuisine Minceur® – great slimming cuisine) to complement the spa. Guérard won his first Michelin star for Les Pres d’Eugenie in 1974 and his second just a year later, with a third coming in 1977. He has held three Michelin stars continuously ever since, celebrating his 41st anniversary this year.

A number of acclaimed chefs have trained in his kitchen including Alain Ducasse, Michel Troisgros, Gérald Passédat, Sébastien Bras and Daniel Boulud. The first Roux scholar Andrew Fairlie (1984) did his threemonth stage at Les Pres d’Eugenie, as did Matthew Tomkinson (2005 scholar).

Michel Roux, OBE: “We are honoured and delighted to welcome our friend, Michel Guérard as Honorary President of the Judges 2018. Like me, he is a Meilleur Ouvrier de France (MOF) for pastry and his famous restaurant, Les Prés d’Eugénie in Landes, has held three Michelin stars for more than 40 years. Michel is a true artist in both cooking and pastry. He also holds the rare distinction of having been selected twice by scholars for their chosen stage, namely our first and now Head Scholar, Andrew Fairlie in 1984, and Matthew Tomkinson in 2005”.

Michel Guérard: “I am honoured to be involved with the Roux Scholarship this year. From the beginning I have taken a keen interest in the talented chefs who have won this prestigious accolade, and I was delighted to host the first scholar Andrew Fairlie for his stage in 1984, and also Matthew Tomkinson in 2005. I’m excited to see the competition in action and it will be a pleasure to join the Roux family to choose the 35th scholar.”

Michel Roux Jr & Alain Roux: “We are so pleased that M. Guérard has agreed to be with us for the 2018 Roux Scholarship. Not only will he bring his wealth of knowledge to the panel of judges, but also his genuine warmth, charm and wit, which we are sure will inspire all of our finalists.”

Applications for the Roux Scholarship 2018 have now closed. In the coming weeks, the judges will select the best 18 recipes from those submitted. These chefs will be invited to cook their dish and a ‘mystery box’ dessert challenge at regional finals to be held in Birmingham and London on Thursday 8th March 2018. Six winners will go through to the final cook-off.

At the final, six finalists will be given a recipe and ingredients for a main dish, either classic or modern and three hours to prepare and present it to the judges. The winner will be announced at a prestigious award ceremony at The Langham, London, that same evening (26th March).