Aberdeenshire Chef Ross Cochrane has taken the title of National Game Chef of the Year in a fiercely fought cook off with top chefs from across the UK.

The final held in Ayrshire College’s hospitality training facility was heralded a huge success by organiser’s Braehead Foods. Managing Director, Craig Stevenson said, ‘Every year I’m amazed by the quality of dishes produced by the finalists and this year is no different. We would like to congratulate Ross on this fantastic achievement and hope he enjoys his year as the UK’s best professional game chef.’ 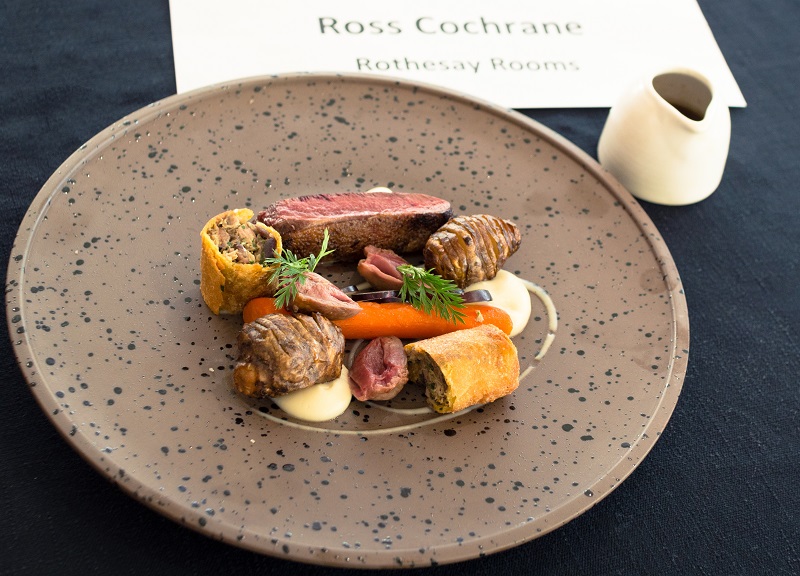 Ross will be jetting off to Sweden on Friday morning where he will enjoy Michelin star dining for three nights. Main sponsor, Highland Game, who have been involved with the competition since it started, have also organised for Ross to enjoy a once in a lifetime wild boar hunt in the snowy Ericsberg Estate in Katrineholm on Saturday afternoon.

Ross said: “Taking part in the Game Chef of the Year competition was a great experience. During the final, we had just two hours to prepare, cook and serve two plates of each dish for the judges which was a challenge. I was cooking against some very talented chefs who I really respect so to have been crowned the overall winner is a huge accomplishment which I am very proud of.”

The winning dishes were:

Chairman of judges, Ian McAndrew, who has been on the panel since the competition started in 2012 said; ‘This fantastic competition has grown year on year in numbers of entries as well as in quality. Game is so important, not only to Scotland but in the UK as a whole. No other country has such a wealth of game at its finger tips and this is the only competition that celebrates this important and diverse ingredient to the full.’